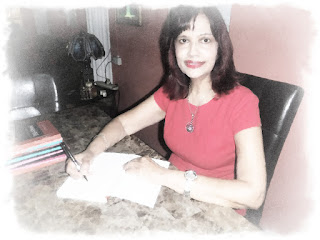 On 8th June 2020, WORLD NATIONS WRITERS' UNION awarded Jury members with great evaluation skills and who had supported in evaluating hundreds of submissions for various contests conducted by the Union. 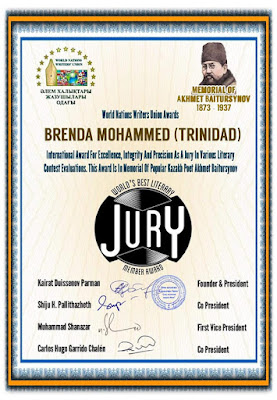 On 8th June 2020, WORLD NATIONS WRITERS' UNION awarded Jury members with great evaluation skills and who had supported in evaluating hundreds of submissions for various contests conducted by the Union.
After discussing the matter with World Nations Writers Union Co-President Shiju H. Pallithazheth, First Vice President Muhammad Shanazar, and Co-President Carlos Hugo Garrido Chalén, as well as other literary Icons in Kazakhstan's Literary board, they decided that as a memorial to Kazakh's famous poet and literary scholar, Akhmet Baitursynov, they would dedicate a highly valued award to writers with proficiency in literary evaluation.
Trinidadian author Brenda Mohammed was among the first batch of eight recipients for this distinguished honour approved by the Co-Presidents and First Vice President. 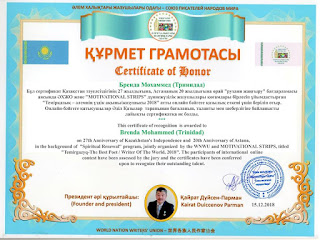 In December 2018, Brenda received a Certificate of Honour from World Nations Writers' Union in recognition of her outstanding talent as a juror in the International contest - Temirgazyq =The Best Poet of the World 2018.
BRENDA'S BIOGRAPHY
BRENDA MOHAMMED, a former Bank Manager from Trinidad is a multi-award-winning author of 26 books, and Founder of the Literary Forums How to Write for Success, Poems for Suicide Prevention, Library of How to Write for Success, and Poems against Domestic Violence. Her award-winning book HOW TO WRITE FOR SUCCESS is popular amongst writers and University students.
She is also Regional Director – Operations- Motivational Strips, the world’s most active writers’ forum with writers from 106 countries, Honorary Member of the World Higher Literary Academic Council of World Nations Writers Union, National President of the Union of Writers, Union Hispaniomundial de Escritores for Trinidad and Tobago, and Vice-Chancellor of Motivational Strips Academy of Literary Excellence and Wisdom,
She recently published three best-selling Anthologies A Spark of Hope Volumes I and II, co-authored by 49 and 64 authors respectively, and Break the Silence: An Anthology against Domestic Violence by 87 authors. All three topped the charts on Amazon as Bestsellers No 1.
In November 2018 Brenda received two awards from Readers Favorite International at an award ceremony at the Regency Hotel in Miami for two of her books, ZEEKA CHRONICLES, and I AM CANCER FREE.
She was inducted into the Indie Author's Wall of Fame in January 2020.
On 20th February 2020, Motivational Strips conferred on her THE PEACOCK oPINION Honour, the first order and distinguished honour of appreciation, that falls under LEVEL 1 in terms of all honours summed up.
This award is given to authors who have shown exceptional support to World Literature. She also received further appreciation with the Shakespeare Medal Award,
Global Literature Guardian Award and Global Dove of Peace Award from Motivational Strips.
Brenda was also honoured on 22nd February 2020 by Peru Government for Excellence in Literature, and in August 2019 by Seychelles Government for her Literary skills.
World Nations Writers Union bestowed on her World Laureate in Literature, World Poetic Star, and two awards for serving as a jury member in two poetry contests in 2018 and 2019.
In May 2020 Brenda received yet another prestigious award from World Nations Writers' Union. In honour of the 1150th anniversary of the outstanding thinker, philosopher, mathematician, music theorist, a scholar of the East, Abu Nasr Ibn Muhammad al-Farabi, the World Nations Writers’ Union, Kazakhstan awarded a world rare and precious prize 'FOR MERITS TO THE DEVELOPMENT OF WORLD LITERATURE' for writers or organisations with high merit contribution to the development of contemporary world literature and to promote friendship and fraternity among peoples of the world. This award was given in consideration of their lifetime achievements in terms of thoughts, mentorship and precision of their pen. Brenda, along with nine other writers, received this award in her personal capacity, as well as for the Literary Facebook Forum she founded How to Write for Success.

Posted by HOW TO WRITE FOR SUCCESS GROUP at 18:05