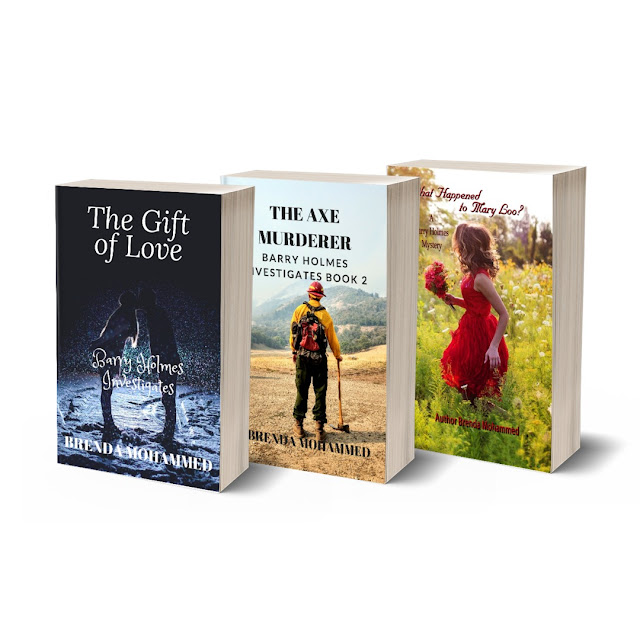 These three Barry Holmes Mysteries are set in the beautiful Caribbean island of Trinidad.

Set on a lovely Caribbean island, The Gift of Love is filled with suspense and mystery,

Crystal is torn between fulfilling her dying father’s wish for her to marry Peter, and her undying love for her boyfriend Barry.

Why was her daughter Lauren kidnapped, and by whom?

Only one man is willing to investigate her daughter's disappearance.
Who is he?

What was The Gift of Love and who was the recipient?

The Book is the exciting prequel to a new mystery/detective series Barry Holmes Investigates.
You would not want to miss this.

The Gift of Love once made it to Best Seller No 1 in all three categories - one-hour mystery thriller, private investigations, and kidnapping fiction.

Set on the beautiful island of Trinidad, The Axe Murderer, a Barry Holmes Mystery, is a quick, easy to read, enjoyable short story about kidnap and murder.

This mystery has a relaxed writing style and a pleasant tone that demonstrates the fragile state of the human mind and is written in the author’s humorous style.

The author takes the reader on a thrilling journey to solve a string of murders plaguing a small community.

Barry Holmes is meticulous in his investigation and leaves nothing to chance, but he was shaken when it appears he could be dealing with not one but two murderers.

Holmes remained undaunted and vowed not to rest until he found his man or men.

Readers are treated to a bonus read of the prequel to the book, The Gift of Love, which made it to Best Seller No 1 in all three categories - one-hour mystery thriller, private investigations, and kidnapping fiction.


3.#NEWRELEASE - WHAT HAPPENED TO MARY LOO?

"What Happened to Mary Loo" is the third book in the Barry Holmes Mystery Series written by Brenda Mohammed author of 25 books.

Jacob’s wife Mary Loo disappears in a bizarre incident in front of their very home in the Caribbean Island of Trinidad.

Detectives Rudolph Sergeant and Joseph French fail to find a suspect and tries to pin Mary’s disappearance on her husband Jacob and the helper Josie.

WPC Jean Bryant disagrees with the detectives.
Barry Holmes steps in and does his own investigations.

He dismisses both detectives and chooses WPC Jean Bryant on his team.
You will be taken on a roller coaster ride thereafter to discover what happened to Mary Loo.

BOOKS ARE AVAILABLE ON AMAZON. CLICK HERE
Posted by HOW TO WRITE FOR SUCCESS GROUP at 05:41