Love Springs Freely from the Heart by Author Brenda Mohammed 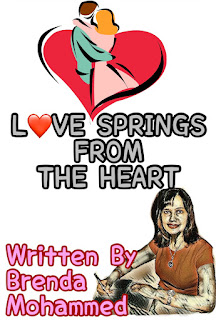 LOVE SPRINGS FREELY FROM THE HEART

Love isn’t possession or a transaction with another.
Love isn’t lusting after an “image” or wanting someone to smother.
When you fall in love you want to share both love and pain.
Love springs freely from the heart and is not looking for gain.

Love is a precious gift from the sincerest of hearts.
Love is being with someone for what they are, both playing their parts.
Being with that cool person that accepts your weirdness
And both totally being yourselves in all fairness.

Love is not a relationship; it’s more a natural state of your being.
Giving freedom and space to each other and not being demeaning.
Love is unconditional and forgiving because you are LOVE.
When loving feelings flow they bring blessings from above.


She is also Regional Director – Operations- Motivational Strips, the world’s most active writers’ forum with writers from 106 countries, Honorary Member of the World Higher Literary Academic Council of World Nations Writers Union, National President of the Union of Writers, Union Hispaniomundial de Escritores for Trinidad and Tobago, and Vice-Chancellor of Motivational Strips Academy of Literary Excellence and Wisdom,
She recently published three best-selling Anthologies A Spark of Hope Volumes I and II, co-authored by 49 and 64 authors respectively, and Break the Silence: An Anthology against Domestic Violence by 87 authors. All three topped the charts on Amazon as Bestsellers No 1.
In November 2018 Brenda received two awards from Readers Favorite International at an award ceremony at the Regency Hotel in Miami for two of her books, ZEEKA CHRONICLES, and I AM CANCER FREE.
She was inducted into the Indie Author's Wall of Fame in January 2020.
On 20th February 2020, Motivational Strips conferred on her THE PEACOCK oPINION Honour, the first order and distinguished honour of appreciation that falls under LEVEL 1 in terms of all honours summed up. This award is given to authors who have shown exceptional support to World Literature. She also received further appreciation with the Shakespeare Medal Award, Global Literature Guardian Award and Global Dove of Peace Award from Motivational Strips.
Brenda was also honoured on 22nd February 2020 by the Peru Government for Excellence in Literature, and in August 2019 by Seychelles Government for her Literary skills, and was awarded World Laureate in Literature and World Poetic Star by World Nations Writers’ Union.
Follow Brenda on Amazon CLICK HERE

Posted by HOW TO WRITE FOR SUCCESS GROUP at 15:13