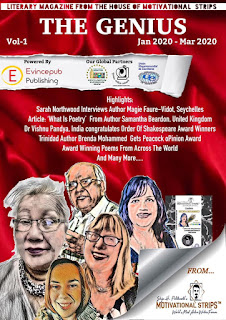 On March 6th, Shiju H Pallithazheth, Managing Editor and Founder of Motivational Strips Global Forum, the most active writers' forum, announced a change in name for the MS Magazine.
It has been renamed THE GENIUS.
The Magazine will be released this month and will have value, prestige, and honour, as all the articles and poems were selected after strenuous evaluations through a worldwide participated contest of eminent literary scholars and authors.
There were more than 400 submissions of poems and articles, from which 50 best were chosen.
The new cover gives an idea of what's inside and it looks exciting.
Articles were selected from 72 countries as follows:

Posted by HOW TO WRITE FOR SUCCESS GROUP at 09:03

Email ThisBlogThis!Share to TwitterShare to FacebookShare to Pinterest
Labels: MS Magazine, The Genius